I promise this is the last updated floor plan you will see.  It’ll have to be because the addition is actually being framed out this week!

But there is a reason I haven’t shared any renovation updates in the last few weeks.  Not because nothing is happening, but because there were so many obstacles and things to figure out that there wasn’t time to sit down and write a post!  We’ve done renovations and figured out floor plans in the past and have never really run into issues.  Man, have we run into problems with this one!

I think the main reason it’s been so hard to nail down is that we see more future potential in this house and though it won’t be perfect, we want to get it as close as possible and really address our needs as a family.  This has been a frustrating, but humbling process.

As you guys know, the plans have already drastically changed once.  You can read about Phase 1 of plans here and then Phase 2 here.

Remember our decision in Phase 2 to add basement in the back portion of the addition?  Here was that plan: See the basement stairs just off the living room?  That basement would’ve run the entire width of the back (living and kitchen) allowing for an office/studio and playroom down there.  I was so excited about that space!  With the way my work is going, I’ve got to have a big space to get organized, be inspired, and photograph projects.  I’m so inefficient now because I don’t have those things.  Plus, being a full-time stay at home mom too, combining it with a playroom was great where I could watch Rosie play and get some things done in one space.

As I said in previous posts, Chris is the GC for this project where in the past, we’ve had a contractor.  He’s always done a lot of the work, but we had someone managing the foundation and large-scale projects.  We have friends who were willing to help us and we decided this would be great experience for Chris.

Chris was most worried about the foundation portion of the project and we really sought to get the most help with it because that’s what he really is inexperienced in.

Well, everyone had a different opinion when it came to how to do the basement.  We were told it would work and we moved forward with that plan.  The yard was graded and the foundation done: As we got further into this process in the last few weeks, issues started to arise.

First of all, you can see in this photo that this foundation doesn’t meet the back corner of the house as you would expect. As the grader got the majority of the dirt removed, he realized that we couldn’t dig this deep on the left half of the house without it compromising the existing foundation.  That IS NOT something we wanted to do.  And this isn’t something we were aware of until the land was dug up.

So, he helped us come up with this plan, which made the basement significantly smaller, but kept the existing foundation intact.  Once it was finished, you wouldn’t have seen this gap from the outside.

But this issue caused many, many other issues.  The two biggest that we realized we couldn’t overcome were that with this jut out, the stairs would no longer fit where we had them.  We got so many opinions and different people’s ideas, but finally a guy we really trust spent a ton of time out here with us and we talked through every option.

The only way to make the stairs fit would be to have them on the back wall of the living room, which meant no windows on that side and really taking up living room space.  We were already not loving that the living room was only 12′ deep (after built-ins) and really didn’t like this idea. The other issue that he made us aware of is that with the lay of our land, the basement floor was the lowest point on our lot.  Basically, we’d have a pond down there.  Our options were to raise the basement floor making the ceiling height 6’8″ (no longer appraisable square footage) or spend a TON re-working a lot of things outside.

We weren’t interested in spending even more money and we cannot pour money into finishing the basement knowing it won’t be appraisable square footage if we sell down the line.

The basement needed to be raised and just be a nice shop for Chris and storage.

To say we were disappointed is an understatement.  No office/studio for me.  No playroom.  And the foundation is already there.

We really poured over this for a couple of days and decided he was right.  The other options weren’t worth the risk.  We started to feel better about having such investment in this foundation because we realized we no longer have to purchase a shed out back for Chris’ shop and storage and we’ll have way more space.

But….I couldn’t get past not having a designated, well-functioning work space.  I’ve realized that in working from home and with where the blog is headed, I’ve got to have this.

We started talking about options.  The initial clear option was that I would take the guest room for an office.  But that wasn’t ideal: no room for guests to sleep.

And as soon as there’s another baby, I’m out of a work space just like I was in this house when Rosie came.

We realized that we had two choices:

1.) Short-term house: go with this plan of me working in the guest room, but realize that we would be run out of this house much sooner.  My blog is becoming more and more time consuming and we have big plans for it in the next year, making a designated work space essential.

2.) Longer-term possibility: Find a way to add an office making this house somewhere we can stay indefinitely.

This was really hard to decide because we don’t know what the future holds.  We are so incredibly excited about the plans for this new house, but we also love renovating houses.  We LOVE the projects and the income it brings.  So we’ve said all along we would be totally open to selling and moving or staying here for ten years and just see where we feel God leading us over time.

In the end, we decided that we want long-term possibilities for this place.  So, that led us to this plan: Highlighted in pink is what has changed since our last plan: We’ve connected the back addition (living and kitchen) with the side master addition, creating an open 12 x 18′ common room.  Before, this would’ve been outdoor living space.

This will serve as my office and studio with a playroom.  I’m so excited about having this space, I can’t stand it!  And the amazing thing is is that it’s actually more functional and better than it being in the basement.  It’s right off the kitchen and living room, which makes it more usable as an office AND playroom.

But it also will have so much natural light.  Obviously a basement = very limited light.  In this room, we will have a huge window on the back of the house and two large ones down the side.  This is crucial for photographing projects, which I’ll be doing a ton of in here.

I’m so ready to have this light-filled space to work.  I’m thinking fun, creative and colorful, and bright like Emily Henderson’s studio. The other great thing about this is that if we sell it, the investment of adding this on verses finishing the basement will get us way more money back.  This room is technically a fourth bedroom when it comes to resale!

You’ll see that the area where the basement stairs were going has also changed.  We decided to take the space we were adding onto the smaller bedroom and put that in the living room.  That smaller room is the exact size of Rosie’s nursery now and it functions fine.  Would it be nice to have a larger kids’ bedroom?  Sure, but as a family, we spend all of our time in the common spaces, so having extra space there was better.

We considered just having the entire space opened to the living room, but with cutting a door for the office out of the kitchen, we were losing the floor-to-ceiling pantry cabinet I had planned.  So, now, we’ll have a 4×6′ walk-in pantry!

We’re going to sit our living room built-ins back in behind the pantry, so you won’t notice the jut-out of the pantry closet nearly as much.

All around, this plan is so, so much better.  Though figuring it out made for a few very stressful weeks.

Now, the fun stuff is really getting started!  I’m finalizing designs and choosing finishes, which is so fun!  I’m so excited to finally have design-related things to share with you guys and not just the logistics.

To follow our renovation journey every step of the way, make sure you subscribe to posts!  They come straight to your inbox when posted.

And you can catch up on any renovation updates you missed here: 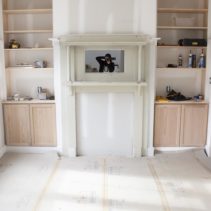