I’ve always heard this saying, but didn’t fully grasp it until the last few weeks.

Since Rosie was born, I can’t tell you how many people have said, “Enjoy her because you’ll blink and she’ll be headed off to college.”  I smile, but inside, I’m saying, “Thanks a lot!  We just had her!”  But deep down, I know they’re right.

It’s been exactly four months since our little Rosie came into the world and I can’t believe how it’s flown.  In some ways, it feels like she’s been here forever.  But in others, I absolutely can’t grasp that I even have a baby.

In many ways, this entry into motherhood has gone better than I ever imagined it would be.  I know so many women who struggle with post-pardum and many other issues and by nothing I did or earned, I somehow missed those.  This has really been the most joyful time of my life.  I wouldn’t say it has been easy.  Motherhood is anything but easy.

But it’s been easier than I imagined it would be.  This sounds horrible, but based on experiences I’ve heard, I was bracing for newborn life like I was bracing for an accident.  Several people told me to have low expectations, to expect for it to be the single hardest thing you’ve ever done.  And I did.

I think in comparison, it wasn’t as bad as I expected.  But I also recognize that Rosie was ridiculously easy in the beginning.  She came out ready to eat and has only had a few minor issues with it since.  And she started sleeping from about 10pm to 6am at one month.

I have absolutely loved watching her grow and change. Things were going great.  And then four weeks ago, EVERYTHING changed.  Rosie is still as sweet as ever and I love her more every day, but it felt like someone replaced my baby with another sleep-deprived, super fussy one.  I know you moms out there are probably nodding your heads.

At three months, Rosie started getting very fussy throughout the day and it just felt to me like she was trying to make a schedule.  We started putting her down for naps (that don’t last very long at all yet) and early at night, and those things helped.  But out of nowhere, Rosie decided she no longer wanted to sleep good at night.

For the last four weeks, Rosie has woken up anywhere from 3-7 times between 12am and 6am EVERY SINGLE NIGHT.  I’ve since learned about the four-month sleep regression, so I know why it’s happening, but it hasn’t made life very easy.  The record was putting her down for about ten minute naps eight times one day because she just cried and cried and getting up seven times within six hours at night.  It’s been a challenge.

I know this is motherhood and Rosie isn’t the only baby who’s gone through this.  We’re all in this together and we’re making it over here!

But I have a whole new appreciation for the saying, “The days are long…”

Boy, are there ever.  I didn’t know it could feel like a day was 48 hours long and I still didn’t hardly get anything done!  But it does, very often.  There are so many days where I didn’t even have time to hardly get a bite to eat, but the day felt hours and hours longer than usual and all I had to show for it was holding this baby.

But in those hard moments in the middle of the night, or the full hour of crying during the day when my nerves are shot, I’ve been reciting this saying to myself over and over.

The days are long, but the years are short.

I know that my time with Rosie is short one way or another.

Hearing about this Charlotte family’s tragedy from my dear friend Beth over the weekend has broken my heart.  The only option I’ve really considered is that time will fly and Rosie will grow up happy and healthy.  But we aren’t guaranteed that.

This family lost both of their sons within three days.  I can’t even fathom that kind of loss.  Trying to imagine what they’re going through and that kind of hurt, leaves me speechless.  But it sure does give me a new perspective when days are long and hard. It’s amazing…after long nights of waking up crying five, six, seven times, I wake up in the morning and look over and without fail, Rosie is smiling at me.

That washes it all away, doesn’t it?

I’m trying to treasure her every minute, even when she’s crying, even when it’s 2am.

I’m trying to adjust my perspective and realize that my number-one job is being Rosie’s mommy and comforting her when she needs it.  Even if I had big work plans, if at the end of the day, all I’ve done is hold and love a crying baby, it’s a success.

And I’m trying to remember that though these days are long, there will come a time, one way or another, where I’ll desperately wish for these long days again and I want the memories of them to be filled with joy not frustration. If any of you mama’s on the back-end of this newborn phase have any sleeping, schedule (or any other) advice, I’m all ears! 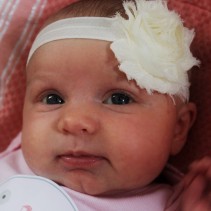 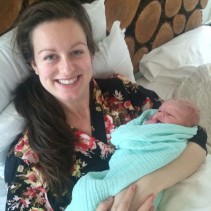 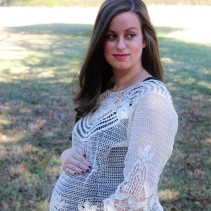 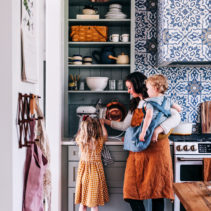 Getting to the Heart of Things