I know it’s been radio silence around here the last week.

As we started renovations on The Buffalo Bungalow, we came across a lot of obstacles that made us re-think and re-think the floor plan.  I’ve probably drawn out thirty different floor plans in the last week trying to solve our issues.

As a reminder, here’s the current floor plan: And here’s the floor plan we were going with before: We knew we couldn’t build within five feet of the property line and were sure we’d cleared it.  But when the survey came back, we had one foot less than we thought on the right side.  That doesn’t seem like it would make a huge difference, but it did.  We couldn’t go beyond the current depth of the house (25 feet) because it would drastically change the roof line.  Our plan is to continue the current roof line over the master addition.  So, we had to really re-work that area to figure out how to make it fit.  We actually move the master along the back, to the left, and then finally back again.

We also discovered a lot more asbestos in the current house materials and realized it could be super expensive to remove and alter certain parts.

We played with all kinds of different plans trying to address these issues and in the meantime, really evaluated our future ideas for this house if we were to stay long-term.  We realized that it might be smart to have some basement space, as many of you suggested.  Yes, it’s more expensive, but not significantly, especially considering the added square footage.

So after much debate, we settled on a plan very similar to that original plan, but with a few key changes.

Our New Plan for The Buffalo Bungalow: Here’s a plan with the changes highlighted so you can easily see it: As you can see, the existing part of the house stayed pretty much the same.

We’re keeping the master on the right side, but changed it up some.  To make it fit, the “Office Nook” from our original plan is gone and we’re taking in that area as my closet!  I am so in love with this master bath and my closet already.  That view from the bathroom door is killing my imagination: Claw foot tub centered under window with his and hers vanities mirrored on either side.

The other big change is the addition area across the back.  Instead of having the living room to the right of the kitchen and behind the master, we moved it to the left.  With the slope and some grading that is surprisingly cheaper than we thought, we’re going to have a walk-out basement that runs the entire back addition!

You can see the basement stairs that are on the left right as you enter the addition area.  We’ve talked to a contractor and realized that adding that basement space is more, but not nearly as expensive as we thought!  You have to have foundation either way, it’s just a bit more foundation…not near the cost of adding this much square footage somewhere else.  The basement will be left unfinished initially and we’ll save up and finish it a little later.  There will be an office/studio/playroom for me that I am super excited about!  A big space to work with room for babes to play alongside will make life much easier.  We’ve decided that having this basement space here would be all the space we’d ever need and it made more sense to add it now as basement than spending a lot more to add it on elsewhere later.

Adding these basement stairs also fixes another issue: that tiny bedroom!  We need eight feet of clearance for the stairs, which leaves eight feet behind those stairs before the exterior wall.  That allows us to add on 8 x 3.5′ to the bedroom, making it 13.5 x 11 (except for the little two foot jut-out).  It’ll be perfect to sink a crib or bed back in that space and it’ll make it feel much bigger!

Now that we have the plans completely figured out and permits submitted, we’re so excited to move forward.  I’m moving full-steam ahead with designing the space and have already bought a few things.

I’ve decided I’m going to share this journey a bit different on the blog than I’ve done in the past.  I usually do so much design brainstorming and sourcing before I ever share anything.  I’ve gotten so many questions about how I design a room from start to finish, so I’m going to show you!

I’m going to show my initial sketches (which I always do for rooms and have never shared), items that I find as I find them, issues I encounter, how I overcome them, etc. leading up to the final reveal!

I’m working now on a full-house design plan that I’ll share soon so you can see where we’re headed with the feel and color. 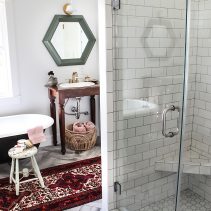