Hey friends.  I’m sorry it’s been a little quiet around here lately.  We’ve had all of our final inspections of the renovation this week.  So, for the last several weeks, we’ve had to focus on fun things like code, wiring, and small details when I just want to be designing and finishing rooms!  Thankfully, that’s about all behind us and we can FINALLY start to settle in this house and really work towards finishing rooms.

On top of that, though, I’ve had some fun and unexpected health developments with my thyroid that have put me nearly out of commission these last two weeks.  You guys were so sweet back in January when I told my thyroid story.  I couldn’t believe how many people commented with such helpful advice and soooo many of you struggled with it too!  I think that’s what has blown me away…it is such a common struggle and I had no clue until I was diagnosed with it.  Some of you have been so sweet and have asked for health updates.  I wanted to pop in and give you a quick one today since so much has happened with it in the last two weeks.

As I said in my post a month ago, I thought I was finally regulated and would have blood work to confirm that the following week.  But I was feeling so good.  My energy was back, the crippling fatigue and sick symptoms were gone.  I felt like myself again.  I had that blood work done and my TSH number came back at a .5.  I know thyroid levels can be confusing if you don’t have experience with it.  Some doctors say that ideal is .36 to 3.5.  Some say they want you to be more up around 1 or 1.5, so that you don’t risk swinging to hyperthyroid.  My doctor was fine with me staying at .5 since I was feeling so good.

I was so relieved to finally have made progress and know this thing was going to work!  Many of you asked about what medicine I was taking and gave suggestions to take NDT’s like Armour.  I hear ya!  I was adamant from the beginning I wanted to take an NDT based on my research and am on Armour.  I’ve had a great experience with the medicine so far.  These issues I’ve had would’ve happened with any brand…it’s just a balance of finding the right dosage for my body.

Well, about three weeks after that blood work (end of January), I started exhibiting hyperthyroid symptoms.  The fatigue was back, though not quite as strong as before.  But the worst and most frightening part came at night.  I would feel so tired, go to lay down, and my heart would start to race.  It almost felt like an anxiety attack.  My heart was literally beating out of my chest in a way I’ve never felt and really scared me.  I was shaky, nervous for no reason.  And it would take an hour or two to calm down and go to bed.  Obviously, my level was too low and needed to be brought back up slightly.

A week and a half ago, we lowered my dosage just slightly to hopefully bring me back into ideal range.  And these last two weeks or so have been rough.  With every other time I started a new dosage, it took about two weeks to feel better if I was going to, but I didn’t expect to feel so bad during this two week period.  I feel much worse than I did with the hyper symptoms, but the doctor told me to expect that.  Starting a new dosage and your body figuring it out can send you into some tailspins, it seems.

The fatigue these last two weeks has been no joke, y’all.  I can’t keep my eyes open all day and just feel achey.  These last two weeks with the symptoms coming back have been discouraging.  I keep telling myself to chill out!  It’s working, we just have to find the right dosage and I’ll be feeling good again.  But it’s been hard to trust in that in the midst of the symptoms here lately.  It makes it so hard to work and get things done in the house.  I have soooo much less energy and really have to devote that to taking care of Rosie.  But these last two weeks there have been behind the scenes planning, inspection stuff, etc. that HAD to happen, so it’s definitely gotten the little time I had for work.

I think the worst part, though, is that I just feel like I’m checked out with sweet Rosie.  When we’re playing or I’m holding her, I am so exhausted and know I’m not being present.  She’s just growing up before our very eyes and I’ve been down these last few weeks feeling like my stupid thyroid is making me miss it.  I know it will get better soon.  Yesterday,  I only had the symptoms in the afternoon and felt more like myself in the morning, instead of it being around the clock.   I’ve been trying to force myself this week to stop all the noise that I’m failing at so many things because of this sickness and just rest with my girl. Earlier this week, we spent the entire morning out on the porch.  I didn’t bring my phone (though I went to get it to film her babbling) and we just got outside.  We ate breakfast out there together.  We read books.  We chatted about life.  It was such restful time that this mama needed right now.

Thanks so much for the encouragement y’all have given me about this issue!  I appreciate y’all walking through not just our renovation journey, but also the journey of our family. 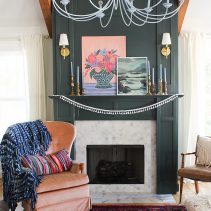 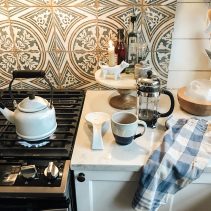 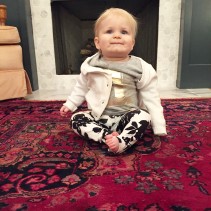 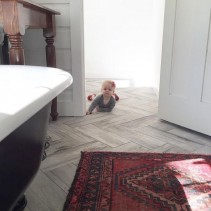