I’m so excited to start sharing reveals and progress on our spaces here!

With every reno we’ve done, I’m so excited to have new blog material.  But the season right around packing, finishing the house to move in, moving in, and initial settling is always a little quiet around here.  Creating all that material plunges me into a bit of a blogging black hole, especially now that there are two babies thrown in the mix.  BUT, we’re slowly and surely getting settled and there is SO MUCH TO SHARE, y’all!  I’m thrilled for this fall to really share how this home comes together.

The bathroom made major progress during that phase of packing and moving since we had to have it to use…hello one bath house.  I said in last week’s bath design plans post that bathrooms usually present such a challenge for me!  They’re so functional and usually have such little room to layer on all the fun style I love.  But I worked hard on this one to create something with lots of personality and it’s shaping up to be my favorite bath we’ve ever done….and this is the seventh one we’ve done!  How crazy is that, y’all?

I’ll be officially revealing this space very soon!  I decided it was about time to start the fun Buffalo Stone Cottage reveal train that’s coming our way over these next few months.  Y’all have been ever so patient while we renovated and moved, so get excited!  It’s coming…but before we get to the reveal, I wanted to share the phases of progress on this bath so that you guys could see how the design plans started coming to life! As I said in last week’s post, baths in old houses are tricky.  Sometimes they look horrible and all the damage they’ve withstood is visible.  Sometimes the room is okay and you wonder what’s lurking behind those walls.  Well, this one looked worse in person, believe me.  But we’ve learned that gutting baths is the way to go with old houses (especially that were rentals and not well maintained) because we’ve found EXTENSIVE water damage in every single one. Yeah, it was rotted all the way through.  Look hard and you can see dirt…like under the house, in the crawl space, GROUND.

We gutted the entire space and then first on our list was repairing and reinforcing the floor.  Tiling the floor was one of the first things we had to tackle and we needed it safe to walk and work on. Once the floor was reinforced, we opened up the window frame as big as possible considering the shower tile and framed out and installed the new window. Next came the tile floor. I’d pictured something that could’ve been original and this white and gray honeycomb reminded me a lot of an original tile we had in a bath a few houses ago.  But I loved the updated feel of the tan/gray diamonds breaking up the white hexagons.

After that, Chris started working on carpentry.  I pictured shiplap 3/4 of the way up to add lots of charm and character. As soon as it started going up, I was in love.  The great thing about nickel groove shiplap (where there isn’t a true gap in between boards – think tongue and groove) is that you don’t have to have sheetrock behind it.  So if the space is gutted, as ours is, it doesn’t add as much cost as you’d think to just replace drywall with shiplap, especially in a small space.

The shiplap against those floors is just so good to me!

Then, the over-sized white subway tile was installed as the shower surround. We went all the way to the ceiling with the surround.  I like that design-wise because I think it looks cleaner.  It’s sort of like how I like hanging curtains at the ceiling…it doesn’t break up the room visually and makes the ceilings look much taller.  But it’s also better to me functionally.  I always worry about water damage above the surround in a shower.  This is worry-free.

And once all of the carpentry and tile were done, it was time for paint.  I wanted a blue/gray like our fireplace and we ended up going with Valspar’s Nordic Blue.

We hired out all of the paint in this house…they can do in a week what we can do in two months with kids and we were on a super tight timeline.  We wanted it all painted and ready before we moved in with the babies too.

They sprayed the trim in the bath with a semi-gloss so that it’s more durable and cleanable and I like for my trim to have a little shine. All the heart eyes over that color on the shiplap!

We love using vintage pieces wherever we can because it just adds so much age and character.  We were in a bit of a dilemma when choosing a vanity because we wanted something with storage, but we had very little space to work with.  We needed something that was very narrow, so it didn’t take much depth in the room.  We also wanted something that was a bit wide to maximize storage.  And we really wanted a piece with character.

We did a lot of searches on ready-made vanities and there weren’t any that fit the dimensions we needed to maximize function in this space.  Most everything we found was too deep…we needed around 15″ deep.

We came across this vintage washstand at our new favorite spot in Greenville: Route 276 Cool Crap.  How awesome is that name?  You just know they have good stuff.  We ended up finding quite a few vintage pieces to maximize character and function in this house!  But back to the vanity… This washstand was the exact depth and width we’d wanted and it gave us storage.  It has a great drawer and then doors that open up underneath.  And it has so much character.  I really wanted a wood element in here and this one is perfect.

The only issue was it was way too short.  We brainstormed and came up with a solution that let us choose the perfect height for us!  We decided to take a cue from more modern floating vanities and cut off the legs so we could mount it to the wall.  We’re tall in this house and needed about 10″ more than those little legs could give us to make it comfortable for us to use. We’ve had wood vanity tops in every house so far and we’ve never had an issue with wear.  We do extra coats of poly and then make sure not to leave standing water around the sink when we can help it. I love the blue shiplap against the tile floor.  I think the details, finishes, and texture paired together is what make me so happy in here. And the wallpaper we chose against that color?  Stop it.  I just looooove it, y’all.  Who wants a little glimpse?  I can’t wait until the reveal, it’s just too good! Alright, that’s all on this space until the big reveal!  I can’t wait to share this finished space with you, friends!

This room is designed in partnership with Lowe’s.  All design ideas and opinions are 100% my own. 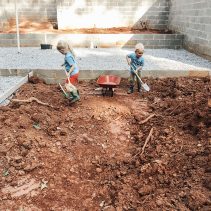 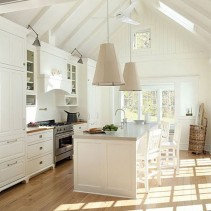 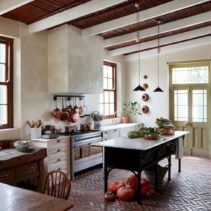 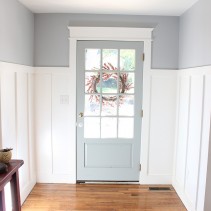 Why we chose light wood floors