As I’ve told y’all, my one must for this bath was a clawfoot tub.  I’ve wanted one in the last two houses, but it really wasn’t possible with the size of the bathroom.  There were several times throughout planning this house that we thought we might have to get rid of it.  Fitting that and a separate shower into a bath require a lot of space and planning.  We re-drew the plans so many times and finally had a spot for one.  Then we started looking…

We knew that clawfoots can be expensive.  We were really sold on having an actual clawfoot with the feet, not just a free-standing tub.  There are some beautiful modern tubs out now, but I really wanted the age of the clawfoot.  The cheapest one we found new was all-white and was $1,000.  Most are way, way higher than that.  While that’s not the worst price for a clawfoot tub, it wasn’t cast-iron and we thought we could get more quality for a cheaper price.

We researched refinishing old tubs and decided to go that route.  We read a lot online and then talked to a professional tub re-finisher that did our last two tubs.  He suggested making sure that we found one with as little rust as possible.  The more rust, the more work to refinish and that means more cost.  He gave us a base quote of $350 to refinish the inside and an additional $300 to do the outside, but it could be more depending what shape the tub was in and how much work it required.

He also told us, as did several online sites and antique dealers, that you had to find one with the feet.  Apparently, all of the feet and fittings were made differently, so if you don’t buy a tub with the feet that go with it, it can be nearly impossible to find feet that will fit.

Now, if you don’t care about having the feet, there are some good options out there where people have built stands for it.  Someone just told me on Instagram yesterday that House Tweaking built a wooden stand for hers and it really looks awesome!  You can see how she made hers here, if you wanted to go that route.  Tubs without feet are less expensive, so if you have someone handy who can built you a cradle, you’d be all set!

We finally found our tub at Scott’s Antique Market in Atlanta. It did have some rust around the drain holes, but most of what you see in there is dirt.  You can see that this tub was re-finished once before and it’s peeling off some.  The feet weren’t on it, but they were sitting inside it.  They guy we bought it from was really knowledgeable and was an antique’s collector, so he was able to help us pick out the best one.  We got this one for $200.

The outside of it had several layers of peeling paint, but wasn’t in bad condition.  Of course, I just realized that the pictures of the outside of it were on my old phone, which recently died.   So y’all will have to picture that part with me.

I really wanted to paint the outside a different color, but that also became our best option budget-wise.  If we were okay with a two-toned tub, we could paint the outside and save the $300 it would cost him to finish it to match.  We could paint it for the cost of a can of spray paint and a little time.  I didn’t want to try and paint it white because I knew what those tub finishes looked like from the others we’ve had done and I knew it would look like a different finish. The tub is cast iron, so you can prime and spray paint it like you would anything else (we researched to be sure). Because it’s so big, we had to put it in the bathroom before the door frame went up!  Which also meant we were painting it in there.  Good thing the rest of the room was very unfinished when he painted it – we did that before tile or anything else.  Chris sanded and scraped the layers of paint to get it smooth and then just primed and spray-painted it with black glossy spray paint.  I was so excited about the fancy, glossy black feet against the rustic floor and it did not disappoint!  We went with standard Rustoleum glossy black spray paint. {Faucet is from Delta}

Now the feet were really rusted.  They were a good lesson in making sure that you get as little rust as possible.  Thankfully, my father-in-law has the capability at work to sandblast all of the rust off.  They wouldn’t have looked nearly as smooth if we had just gotten off what we could and then painted over it.

Having the tub in the room before anything else was done was a little tricky, but we made it work.  After letting the base dry, we very carefully sat it sort of leaning upside down in the shower box that had been built, so that the floor could be tiled.  Once the floor was done, we sat the tub in place so that the shower could be tiled.  Then, we hired Carolina Tub Doctor to come and refinish the inside.  Now I know there are some DIY kits out there for refinishing tubs.  I’ve gotten questions about those before.  We’ve never tried them because we’ve heard they don’t get nearly as good of a finish and don’t last nearly as long.  I could be totally wrong on that, but just don’t have personal experience with it.  For us, we’ve been so pleased with how these tubs look and last that we’re good spending the money to have someone else do it.

In the four hours he was here, our tub went from this… We were worried about the painted base getting messed up because it would’ve been nearly impossible to touch up without getting black paint where it didn’t need to be.  But they suggested we paint it first and he said it was used to working around that.  When he was spraying on the new finish, he had all of the black covered and took a lot of pains getting it just right. We can’t believe how good it turned out!  The total cost for him to refinish it ended up being $399.

So instead of buying a new, lesser quality tub for $1,000, we got a solid cast-iron vintage tub that turned out beautifully for a total of $600.

I really can’t believe it’s the same tub!  We had to allow two days for it to set, so if you’re doing this, make sure you allow that time before having the plumber come to hook it up. I absolutely can’t wait to soak in this tub in a few weeks. 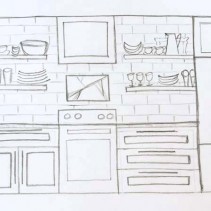