Thanks for all of your sweet comments about the new couch!

Yes, my husband was so sweet to take me on that journey.  The whole way, he was like, “I hope you like this couch because after driving two and a half hours, we’re coming home with it whether you do or not.”  In a sweet way, of course 🙂

I’ve been wanting to start “finishing” since we started renovating in February!  Now, that we’re actually able to, we’ve been delayed by trying to find this couch.  I really want to finish up the living room first because to me, it’s the most important.  It’s where we spend all of our time and with our open floor plan, it really is the “center” of everything.

So, finding this new couch gives me a direction! I said yesterday that I want to lighten things up now that we have her.  Yes, we’ve got white walls, but we also have dark beams and y’all know I prefer things pretty light and bright.

I also mentioned I would talk about this rug today. We’ve had it in the living room for the last week or so.  I really thought the colors would help brighten up the room to me.  I love the rug, but am not totally sold on it in this room and more importantly, the Mr. says no way.

As you saw by yesterday’s post, my husband is usually really supportive and cooperative when it comes to my design ideas.  There have been some that he hasn’t cared for, but has grown to love.  And the few that he’s been totally against, we went with what he wanted and in the end, he was right!

Marriage is about compromise.  So, even though I’m the one who really loves design, designing our home is also about compromise and making it a place that my family feels at home, not just me.

When I bought this rug, I really didn’t think my husband would mind it.  At first, all he liked were plain jute rugs.  When I first bought this navajo for the kitchen, he was really unsure about it, but then he grew to love it. Apparently that logic doesn’t work with Chris.  I asked him if he liked this one why he didn’t like the new one.  He said the new one was “fru fru floral.”

Huh…okay then.  He also said, “I know you like things eclectic, but this just doesn’t match.”  That one cracks me up.  Eclectic isn’t supposed to match, but I do see his point.

So, it looks like that rug is going and I’m really okay with it.  I thought about using it in the master bedroom, but he seems to be leaning toward out of the house.

So, the new rug is already going.  But that brings me to my plan for lightening up and finishing the room. First up is new rugs.  I talked about layering rugs here and I really think I want to go back to that idea. I’m really inspired by this image.  I love the kilim and cowhide layered together.  Maybe a lighter cowhide like this? Can y’all picture it with me?

Other things I want to fix…first up is the Mister’s chair.  I told the story of his chair here. The dark leather bothered me, but we lightened it up with some accessories.  And then I go and buy a dark couch.  The two together are just too dark to me.  But before you jump ahead and think I’m a horrible wife for making him get rid of his beloved comfy chair, hear me out.

I didn’t even suggest we get rid of it until I noticed that he NEVER, and I mean NEVER sits on it anymore!  Now that we have the couch, he pulls the ottoman over and sits on the couch.  After about the fifth time, I mentioned that we might could sell his chair, but keep the newly covered ottoman.  I was ready for a quick and vehement, “No!  It’s my chair!”  Instead, he calmly said, I’ll think about it.  I think it might be on its way out, but I’m going to let him make that final decision.

If it is (fingers crossed), I want to replace it with something lighter and much smaller scale.  The green chair that is on the other side of the couch is smaller, so this big one makes the room look lopsided.

I’d LOVE to replace it with this Bertoia Style Diamond Chair in white. So in love with that…

Next up, a new coffee table.

I really love the black trunk with gold detailing, but again, it’s dark.  I think I’m going to move it to the foot of the bed in our master and DIY a light coffee table.  Maybe round?

So there you have it…my plan for lightening up this newly darkened room to make the couch the one dark thing that pops and stands out: new light coffee table, layering light and bright colored rugs with texture, new chair in place of dark one.  Oh and new light fixture, end table, lamp, okay I could go on and on.  But at least there’s a plan in place for a few big things.  What a difference that would make!

I’ve got my eye on a few new rugs and ideas brewing for the coffee table.  Hopefully, I’ll have more updates in the living room really soon 🙂 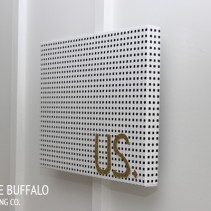