Okay friends, a momentous day has come!  I’ve been dying to share this for the last month!

I’m officially introducing you to our next home, The Buffalo Stone Cottage. In the last two Our Story videos, I broke down why we sold The Buffalo Bungalow and how we found this little gem in our same neighborhood.  She has more existing charm and character than any house we’ve ever bought. She was built in the ’40’s and is definitely in need of a little TLC.  As I broke down in the last video, our initial plan was to add on, making the house a 3 bed/2 bath 1600-ish home.  But after all of our realizations this last year about living more simply and the journey to be debt-free, we’ve decided to scrap the addition plans and make her 1100 square feet work for this next season.  We may choose to add on in the future or move on to a bigger house at some point…we have no idea!  But we do know that we’re supposed to do this renovation as cheaply as possible to allow for more debt to be paid off and more room to save and give in this next season so that it can launch us into things in the future.

As I kept saying in our story videos, we don’t know the whole picture (not even close), but we know the next step….and here she is, The Buffalo Stone Cottage, in all her glory.

While there is PLENTY to do here, this is the smallest reno we’ve done by far.  Take a look at the before and after floor plans: Yes, very little change.  The only floor plan changes you’ll notice are the two walls we’re removing in the main living areas.  The rooms were small and very choppy with walls, so to really make this space function for us, we’re opening up the walls between the living room, dining room, and kitchen.  We’ll still be doing some things to help define those spaces, so it isn’t one large room.  But we can already tell the house will feel much larger with them opened and I love that I can be cooking and watching the kids play at the dining table or in the living room.

In the plans above, no room’s function is changing, so I only labeled the BEFORE plan, so that you could see more of what we’re doing in the AFTER.

I’ll talk more about this in specific room plans, but you’ll notice that we’re changing up the kitchen layout to make it much more functional and largely increase storage!  While we’ll definitely have less storage than our current house, it isn’t by much even though the space is much smaller.  We’re doing built-in wardrobes on either side of our bed, as the master closet is really small.  There’s a ton more that we’ll be tackling to help this space function for us that I’ll share as we go!

The main thing that told us we could do this as is right now was the tiny little room off the side that you see is Dax’s room.  This is an old screened porch that had already been closed in, but needs a lot of work and reinforcing.  While it wouldn’t be ideal for an older child (though I do think you could make it work), it’s absolutely perfect for a nursery!  I really wanted the kids to still have their own rooms.  I am all for kids sharing, but didn’t want to put a newborn in with Rosie unless I had to.  Sleeping, feeding, etc. would definitely wake her up.  So, this space is perfect!  This was the first thing we measured out and all the furniture we needed in there fits perfectly, like it was designed just for him and his needs.

There’s so much more to share about what we’ll be doing here.  Today is just a glimpse of where we’re starting.  Who’s ready to see some before’s?  I’ve gotten a lot of requests in the past for a video tour because it’s so hard to really picture a space from a layout and pictures.  This time, we put one together for y’all and I am so glad!  I do think it helps give you a much better feel for the house.  You’ll notice I’m extremely pregnant in this video…we filmed all of this and took all of the before photos on Dax’s due date!  Since we were closing so close to Dax coming (it ended up being the day before his arrival), they let us stop in early to make plans and take all of this.

I’ll share some before pictures as well down below, but welcome to our Buffalo Stone Cottage!

I’ll have to do more video tours of rooms and the house as it finishes up!

Now, here are some before photos of each room as well.  As I said in the video, thankfully, the whole house doesn’t have to be gutted like others we’ve done.  You can see in a lot of rooms, the plaster is already patched and sanded!  So the white splotches may not look great, but that’s way less work we have to do.  The only rooms that ended up having to be gutted are the kitchen, bath, and Dax’s room. There is so much to share!  I am so thrilled to have another project to work on…we thrive on these!  And I can’t wait to share all of the renovation progress, design plans, etc. going forward!  I’m so excited about my overall vision for the house and will share that later this week!  It’s going to be good, y’all.

Thanks for following in our journey!  Our fourth house in seven years…here we go!

That’s been The White Buffalo motto for the last three years and is still what I’m striving to do each day in our home and with our family.  Yes, that often means tablescapes, inspiring interiors, and fun before and after renos.  But it also means family.   Faith.  Joy.  Struggles.  Laughter.  Health.  You’ll find a little bit of all of that here as I share how we’re choosing to live with both style and purpose.
A huge part of that is our journey toward a more natural life that’s focused on enjoying each and every moment together.  A huge thanks to my main blog sponsor that makes this dream of mine possible: 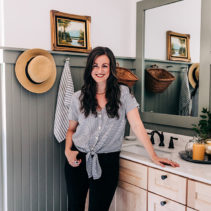 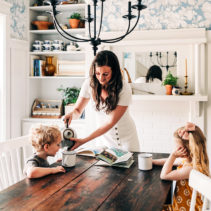 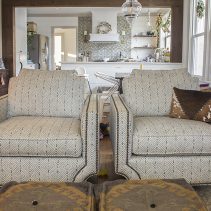 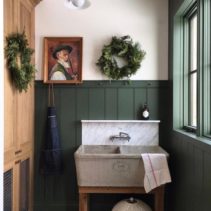