Who’s ready to see yesterday’s paint plan in action?  I’m so excited to share the first glimpse of our nearly finished house with you guys!  Today, I’m going to be sharing the living room.  Like I said yesterday, I’ll share mood boards and tons of details about how these rooms will be finished later on, but I decided to share progress more as it’s happening this time around.  And seeing the paint and progress will give you guys a great idea of where we’re headed.

First, let’s take a look at the befores of this space again: {you can see all house befores & the before video here}

So how does our living room look today?  We’ll start with my favorite part first! Oh that fireplace!  I wanted to make it a real focal point not just of the living room, but of the house!  All of the main areas are open and this is seen from most spots. We extended the fireplace visually to the ceiling by building two boxes to serve as columns up the sides.  This was inspired by what we did from scratch in our current living room, but was much simpler.  Then, we trimmed those out with some basic trim around all four sides.  In the center, all we did was put a 1 x 4 at the ceiling.  We considered doing more trimwork in the center, but knew we’d be putting a big picture there.  I also thought that once it was painted all the same color floor to ceiling, it would have the impact I wanted and it did!  This ended up being a really simple update for us, but it goes a long way!

This fireplace is painted Templeton Gray.  It reads just as I wanted it to….blue/gray.  Not too blue, but enough to read as a color and not completely neutral, but still feels neutral and goes with everything.  Haha, I realize how complicated I just made that, but that was my goal!  I love how it looks with the Revere Pewter trim so much, y’all.  Painting that trim is probably my favorite design choice I’ve made on this house!

Here’s a view from the other side of the room: The trim is really thick and original to the house, so I love making it stand out with this color.  But it’s still neutral and will go with anything I decide to layer in. We explored so many different options for the beams, but ended up going with the cheapest, simplest option.  I’m going to do a dedicated post on them later with more explanation, but we framed them out just like we’ve done in the last two houses (how we do it here).  They still have to be finished, but you can get an idea of how they’ll look.  I wanted to go with a dark color (but not as dark as the Downtown Cottage beams), so that it would contrast well against the white and all of the paint colors.  I also wanted to make sure it didn’t match the floor.  I wanted a little contrast there.  I’ll share more about the floors later, but we went with no stain, just natural poly.  We were planning to stain them to be the color you see here, but because they’re so old, this is how clear poly reads on them.  And I love it! Here’s a shot from a bit further back to have more perspective.  And it gives you a glimpse of the dining room!  I’ll share dining and kitchen areas tomorrow!

That’s been The White Buffalo motto for the last three years and is still what I’m striving to do each day in our home and with our family.  Yes, that often means tablescapes, inspiring interiors, and fun before and after renos.  But it also means family.   Faith.  Joy.  Struggles.  Laughter.  Health.  You’ll find a little bit of all of that here as I share how we’re choosing to live with both style and purpose.
A huge part of that is our journey toward a more natural life that’s focused on enjoying each and every moment together.  A huge thanks to my main blog sponsor that makes this dream of mine possible: 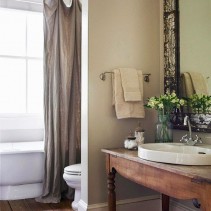 Vanities for the Master Bath 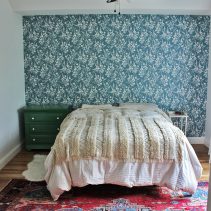 Floral Wallpaper in the Master Bedroom 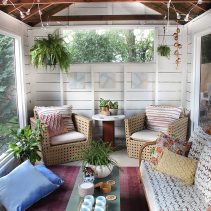 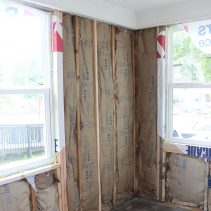