I know I’ve been a bit out of touch lately on the blog.  I started this post several days ago and just haven’t been able to finish.  My grandpa, who is one of the most special people I’ve ever known, isn’t doing so well.  We don’t know how much time he has, but all the family came in and spent the last half a week or so with him.  I’m overcome with the man that he is and how he’s lived his life and that’s why this post is so hard to write.  How do you write about someone who has very literally meant the world to you?  How do you do a man’s life justice in a few short words?

But I feel in my heart the need to share his story.

Every now and then, you find someone who you can see without a doubt is leaving a legacy.  They live each day with purpose and intention.  They have an end goal in mind and every word, every action is chosen to meet that goal.

These people of intentional living are rare and hard to find, but my grandfather is one of these men.

He has lived a long, full life of 92 years and each day that I’ve known him he’s been the same.  Always steady.  Always loving.  He greets you with a smile and a warm hug.  He has grace in his eyes and forgiveness for all deep in his heart.

He served in World War II and wouldn’t talk much about his time there until recent years. Now, I know of the many close calls and difficult days he had there.  I know about how he won the Bronze Star for successfully directing American artillery fire.  I know about how during that mission, his location was detected and a large German shell landed directly in his lap.  It was a dud.

I know about how large pieces of shrapnel flew between he and his friend, mere inches apart.

He is a man of courage, but he is also a man of unwavering faith.  Every single time he talks about the war, after every story, he thanks the Lord for bringing him through.  He knows without a doubt that the only reason he and his three other brothers serving came home and started families was because of God’s ultimate protection and he gives Him credit at every turn. He is a loving husband and father of two boys, one being my dad.  Since I’ve been aware, I’ve never seen him lose his temper.  In fact, my dad and grandma said that in all their time together, they’ve never ONCE heard him raise his voice.  He is firm and a man of conviction, but he is loving and delivers his words with humility and peace.  Where others would fly off the handle and yell or say something in the heat of the moment they would later regret, we have all witnessed my grandpa taking time to pray and process his words and then speaking with yet again, INTENTION.

He loves his two boys with abandon.  He worked tirelessly to afford them opportunities and still does, at every chance he gets.  He is their biggest fan and biggest supporter.

But he always said that he would’ve loved to also have a little girl.

When he learned that I was coming (the first grandchild, but also the first girl), I’m told he was over the moon. I still have that little windmill he gave me many years ago and it will be in our little one’s nursery.

All of my childhood memories have my Papa wrapped up in them.  He and my grandma lived next door my entire life.  I can still remember how he would take me to the high school football games on Friday nights, making sure to stop by McDonald’s on the way for a Happy Meal and apple pie.  I can remember sitting by him in those stands when my feet just dangled from the seat and listening to him explain the game to me amidst his loud cheers of support for the home team my Daddy once played for.

I can remember our yearly camping trips to Tennessee where as soon as we crossed the state line, he would shout out, “Tennessee, I hear you calling me!”  It would wake my sister and I up from the back of the van and we would yell with excitement because we knew that adventure was close.

I can remember going to “Papa’s Restaurant” (his house next door) every single Sunday morning before church for the best breakfast you could buy anywhere.  This man sure knows how to cook.

He loved us girls and made us laugh like no one else. I could go on and on with the wonderful memories I have growing up with Papa, but more than anything, I will remember his testimony.

Because you see, as I said above, this is a man who lived with an end goal in mind.  He has lived his life with the perspective of eternity.  I can’t count how many times he’s talked about the hope he has of meeting Jesus one day.  He talks about it not with a hopeful tone, but with a tone of complete certainty because he KNOWS where he will one day be headed.

His end goal was not just for himself, but for all of us: his entire family and everyone he meets.

I know that the woman of faith I’ve become has so much to do with those morning prayers they prayed so faithfully and the spiritual conversations he would bring up.  And I know more than anything, it’s from the feeling I get when he talks about his faith.

They aren’t empty words to him.  When he says the name of Jesus, there is something behind it.  He says it like he’s talking about a treasured loved one who he knows and has a relationship with. Watching him live and grow old has taught me how it’s meant to be.

He lived well in his younger years.  He raised a family.  He instilled morals and values in them.  He loved his wife with his whole heart and told her every time I was around them. But as he’s grown older, he’s defied what it seems many do.

He hasn’t checked out.

He has seen each new day as a gift from God filled with opportunity.  I come from a musical family, specifically bluegrass.  At 86, he decided to join his talented sons and taught himself the mandolin. He practiced hours a day and even wrote several songs.  Several years ago at Christmas, he wrote a love song for his bride of 68 years. Just a week ago, when we were all sitting around him in the hospital, he told us about a Gospel song he was writing about his faith and testimony.  He told us exactly where it was located so that we could finish it for him, if he didn’t get the chance.  It needed to be finished.

He decided he needed to get his life story down and leave words for future generations.  He worked tirelessly on it every day until it was finished and then had it bound and published for us.

He has more than ran the race well and lived every single day with PURPOSE AND INTENTION.

The last week has been incredibly hard, but incredibly sweet.  Because of how he’s lived and loved, none of us can imagine a world without this man.  The sadness of  that thought is crippling at times.

But it’s also sweet because as I looked around at our family these last few days, I’ve realized that he will never be gone.  As believers, we know that we will all be reunited one day.

But it’s even more than that.  He will always live on because the legacy he has so intentionally left will never die.  It will live on in all of us who’ve watched him live and been inspired by his faith, humor, and heart.

It will live on in my dad, who’s so much like him. I see my dad with his only grandchild at the time, my nephew Malachi, and realize that it looks familiar.  He’s exactly how my Papa was with me and my sister.  He learned from the best.

We all learned every day how to walk with intention and our eyes set on eternity because we had an amazing example who took every single day by the horns and squeezed all the good he could out of it.

I’ll sum up this story of legacy with the most vivid and precious memory I have of Papa.

Last weekend, when we were all gathered around him in his home, he said he wanted to “pick a little.”  In bluegrass world, that means play music.

He said he was up to it, so my dad went and got him his mandolin.  Others brought out their instruments and we waited for him to lead us.  He started with what he calls our “theme song.”  Amazing Grace, how sweet the sound.

At his urging, we begin and finish all playing with the theme song.

Then, he got out his little green, leather-bound journal where he writes down his favorites and started calling out titles.  Several in, he got to “What a Day That Will Be.”

The words nearly got us all.  There wasn’t a dry eye in the place, including Papa’s. Throughout the song, his hand and eyes were lifted upward and the tears coming down his face didn’t stop the singing.  He sang with joy.  He sang with certainty.  And as the song came to an end, hand still lifted Heaven-ward, he finished with an “Amen.”

I couldn’t take my eyes from him and I knew.  Now that’s a life worth living.  And that’s the best legacy you could leave behind for the rest of us when he finally meets Jesus face to face.

It’s a legacy I will never forget and will try to live each day by.  And it’s a legacy that I will teach my daughter about until one day, she gets to meet him for herself. 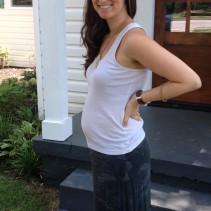