Hi friends! This photo completely represents how these last few months have felt. It’s been a strange, hard, and learning season in many areas of our life, not just the building process.

We have learned a lot so far in this process. We knew it would be different from the renovations we’ve done, but didn’t get how different. In our previous projects, we’ve closed on a property with the four-ish month move in date already set. Once it’s ours, we’re ripping out walls and starting while I’m furiously making plans in my head. We live and breathe it until we move in and then we crash! We aren’t used to waiting on other people to make it happen.

While those seasons are always tiring and stressful, we kind of thrive there. There’s no time for second-guessing plans or decisions, which can be a problem, but also a good thing. You have to make a decision and you just do it. I’m excited for my creativity to have time to flourish and fully develop with this project, but I’ve had to adjust to the lack of adrenaline and fast-pace I’m used to. We both have.

In the last several months since we closed on the lot, we’ve encountered and overcome a lot of building challenges, both with the lot and with the house we’ll build. We’ve also had really quiet seasons waiting on plan revisions, quotes, etc. where we almost forget we’re building a house for weeks at a time. It has been strange!

BUT….I’M SO HAPPY TO SAY THAT WE’RE FINALLY ROLLING AND TO INTRODUCE YOU TO…

OF COURSE, this fifth house has to have a name like all of our others and it is my favorite yet. For those of you wondering, no this wasn’t named after Harry Potter. Though I’m not going to lie, that made me love it even more.

Here’s the story behind the name. We’d been brainstorming names for a few weeks as the feel of the house was taking shape in my mind. I knew I wanted it to feel like this magical little spot in the woods. Almost like a storybook/fairytale house that you could be walking in the forest and stumble upon. I was thinking English countryside. We thought of a few names and didn’t love any. For me, the name of a house is a really big deal. I know that’s silly to some, but it started out of necessity to distinguish our different houses and then the passionate writer in me fell in love with the symbolism and meaning they held. We’re planning to be in this house much longer than any so far, so it had to be right! I wanted it to feel like “Ahhh…yes….perfect. This is our resting spot.”

We were driving around one afternoon and I was throwing out ideas to Chris’ constant, “Those are TERRIBLE.” And he was right. Then out of nowhere, he said, “What about The Burrow? The Buffalo Burrow?”

I yelled, “THAT’S IT.” I knew it. I felt it. Now, Chris has never read Harry Potter, so that isn’t where this came from for him. He’s a project manager for a new restaurant being built called “The Burrow,” and he felt like the style and feel of it fit what we’re envisioning. We talked about the meaning, “to burrow, to nestle in,” and it felt even more right.

Then of course, being the Harry Potter super fan I am, I immediately thought of The Burrow from the books and it’s the exact collected, European countryside, quirkiness that I want. So there you have it friends, THE BUFFALO BURROW.

I could not love it more…the magic is already taking shape.

Now, who wants to see the first look at our Burrow?

There’s so much to share, so today, let’s take a look at the exterior elevations. And then up next will be the floor plans inside.

The plans and design has taken us much longer than anticipated. It took us a month to design them ourselves and feel like it was right. But of course, there were so many things our architect had to “make work” that we haven’t encountered before: the stairs, the roof pitches, dormer placement, lot slope, etc. We went back and forth a lot hashing it out, getting it just right. Our biggest dilemmas came down to getting the spaces we envisioned, having them big enough, but not excessive, AND keeping the house as small as possible.

Remember, our HOA requires a minimum of 1800 square feet (1,200 of that being on the main floor). That was an initial adjustment because our plan was to do a small footprint, full two-story. So we adjusted there and our goal was to stay as close to 1,800 as we could (not counting the unfinished basement). But, as always happens, with the room placements, getting the upstairs right in the eaves, etc., we rang in a little higher at 2,100 sq. ft. But, we’re so happy with the plans and cannot wait to see it take shape.

The layout feels really perfect to us. Of course, there’s plenty we tweaked and sacrificed from my initial wish list to get the size down and save budget, but now that we’re done, those things don’t matter and it feels just right. All of your amazing comments were so helpful to inspire us and process what mattered most to us.

Here she is, friends:

Deciding on the exterior was so much harder than I thought it would be! I am obsessed with front porches and realized that every single exterior I’m usually drawn to has one. But with budget in mind, it was either a front porch or the back screened porch in the woods and that choice was an easy one for us. I also had to overcome my desire for a tiny cottage on the front that went further back. Our lot slope demanded we do as wide and shallow as possible, so I had to adjust there.

I could not stop going back to the photo above. It was exactly the feel I wanted. I’m so excited with how we’ve translated that into our exterior. The structure is pretty similar for sure. The dormers and details are different. I’m still nailing down outside design elements, but I know it will be a variety of Hardy materials. And of course, we’ll add in a ton of design details not seen here like window boxes on the whole first floor, pretty lanterns flanking the door, etc.

I’m THRILLED we’ll have a garage on this house. Our neighborhood requires it, but having never had one, we wanted one anyway. Depending on where budget shakes out, it may be a future phase, but we’re hoping we can do it now. We tried to avoid front-facing, but with the slope and width of the lot, it was the only option. But, I’m excited to do some really fantastic lights on it and do a pergola with a vine growing over the door. I pinned a picture of that years ago and have never gotten it out of my mind!

There are so many things I’m excited about in the back, but mainly all of the views of the backyard! Each room has as large of a window as possible: a triple window over the kitchen sink and a full wall of windows (and windows in doors) in the living room!

But most of all, I’m excited about the outdoor living spaces out here. I have big plans for the screened porch, the grilling and dining deck with stairs down to the yard, and the full patio underneath. This place for us is mainly about outdoor living with the gorgeous woods, so I’m excited to make these areas an extension of our backyard and have it all flow together with ease. I can’t wait to design several different outdoor spaces to each function differently and help us embrace our little forest as much as possible.

And here’s a quick side-view that helps you see the back porches and layout a bit better.

I just can’t believe this is going to be our house. It’s so surreal and such a different process than working on an existing house, but we’re ready to ROLL!

Stay tuned for the floor plans and lots of progress and design details to come. 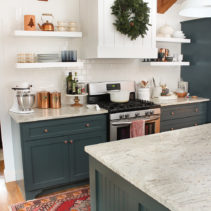 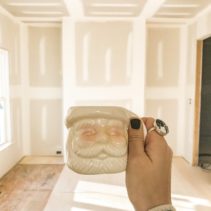 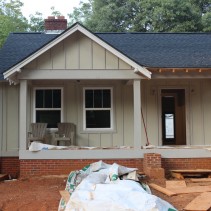 Board and Batten Exterior Progress 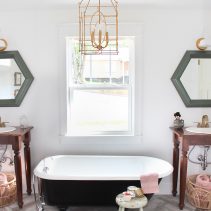