This last week has been a whirlwind, friends!

Two weeks ago tomorrow, I posted about the struggle that it’s been to find our next place to renovate.  Although I only posted about our selling and new house search two weeks ago, we’ve been searching for about two and a half months now.  We didn’t want to officially share until we closed on our current home.

If you missed the Big Secret Project Part I and  II post, you should go catch up first.  This has become some story!

As I said in that second post, finding a house in our current neighborhood felt impossible.  We had one under contract on the outskirts of the neighborhood, but had to drop out.  I said in the Part II post that there had been some options since then, but none had worked out.

Well, what I didn’t share (because I didn’t know how important it would become) was that on the day we learned we had to walk away from the house under contract (this was about three weeks ago), Chris drove around canvassing the neighborhood.  It’s more likely around here to find one For Sale by Owner or by word of mouth than one that’s actually listed.

And he just happened to see a For Rent sign on a sweet little bungalow on my favorite street, much closer to downtown and our favorite nearby park. He immediately called the number and asked if they would be willing to take an offer.  They said they would entertain one and we could see it a few days later.  We tried to be guarded because we knew it was far from a done deal, but it was hard.  This felt like God was providing such a better option than the one we’d just lost.  We loved the area, the house, the street, EVERYTHING better.

The house is super tiny and in need of some love, but it has great bones and way more original character than our house started with.  And of course, we already had big plans for it.

We went and saw the house, LOVED it, and put together our offer.  I came home and immediately started sketching renovation and addition plans.  When Chris called later that day to put in the offer, without even considering the offer amount, they said they’d decided not to sell for tax reasons.

We were so sad!

It felt like the perfect option and we were back to square one again.  We went for another two weeks with no leads and were becoming discouraged, but we felt God giving us peace and saying to wait.  Logically I know that if He wants us to stay in this neighborhood as we think He does, then He will provide a house.  But that doesn’t always look the way we expect.

Last weekend, we were talking about options and trying to decide what to do.  We kept battling looking in other areas.  We really want to stay here, but our impatient selves kept feeling like we might need to just in case.

But the more we talked, we realized we still couldn’t get this little bungalow out of our minds!  It was our ideal and favorite option.

Chris said he felt like we needed to make another offer.  We didn’t think they would take it since they didn’t even consider our amount before, but thought it was worth a shot.

Last Monday, we put in an offer.

They immediately accepted it and it was under contract Tuesday, April 7th.  The cool thing about that is that April 7th was the day we were supposed to close on that first house we lost.  Just a little reminder that God is working all of this out in His timing.

Thankfully, everything worked out to close quickly and by Tuesday morning of this week, just seven days after getting it under contract, this baby was officially ours! It’s so cool, though, to see how God works things out perfectly.  We don’t always see that immediately, but this time we totally did.  The first time we put an offer on this house, we were planning to add way more square footage and put a lot more money in it immediately.  This is our favorite area and we thought, we want to stay here forever!

And we may stay there quite awhile, who knows.  I’ve learned not to make plans.

But after this house fell through, we realized that sinking a lot of money into a “forever” house right now, defeated the purpose of selling in the first place.  Our vision is to renovate, sell, and pay down debt.  So, we decided that the next house needed to be more modest (around the size of our current house) than our original plans for this place.  That could mean we sell again or that we add on a Phase II or something later.

But once we reached this realization, God brought our favorite house back to us and our plans for it are totally different now.

Not only did God bring us a house on our favorite street, in a higher investment area, and with more character, it has almost everything that I said I wanted.  Tiny little things that make me happy, but don’t matter at all in the grand scheme of things!

I’ve ALWAYS wanted a front porch and this has one.  It’ll be changing a lot, but the structure is there.  I wanted a true bungalow with exposed rafters.  This house has that.

And every potential house we looked at, I would evaluate it based on the trees.  I NEEDED large trees.  Parts of our neighborhood have gorgeous huge oaks overhead and I just love the old, established feel it provides.  Chris kept telling me he would plant me a big tree.  I said over and over again, “No, I want like an 80 foot oak tree in the front yard.”

He wasn’t planting that for me.

I was quickly realizing that getting ANY house would be great, oak tree or not. Yes, my friends, God takes us literally.  That IS an 80 foot oak tree in the front yard.

None of those things are super important, and God definitely doesn’t owe us that, but it’s amazing that when we didn’t have ONE SINGLE OPTION, God provides an option that literally checks off every item on our list.  He’s reminding us that He’s capable of anything and that it’s Him who provided this, not us.

Getting this house was such a whirlwind and it’s only going to continue.  We have four months until we have to move out of our current home, so the time is ticking!

Tomorrow, I’ll be sharing all of the befores and the current floor plan.  Then our extensive plans will come right after that!  I can’t wait to share each and every detail of this journey with y’all!

On a different note, have y’all been following along with Blogger Stylin’ Home Tours Spring this week? I’m blown away by all of the amazing talent!

You can see the start of the tour here and then at the end, follow along with each and every amazing link! 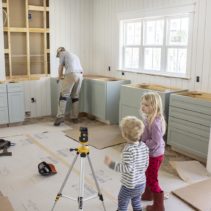