Today is kind of a catch-up business day.  Renovating this house has been one long journey!  We’ve loved how rooms and the house has really started coming together, but we’re so excited that the end is in sight for a completely finished house.  I finally sat down and put together a HOME TOUR with the rooms that we’ve revealed so far.  You can find it by clicking this button that will live on the sidebar.

You can click below to tour our currently revealed rooms.  I love how they all came together and have a similar feel.  I’m a firm believer in creating a cohesive house that flows without having every room matching and it really feels like we’ve done that so far. Now, for the exciting part.

Even though it may not seem like it because we have a lot of rooms left to reveal, the screened porch was our last BIG project.  While there’s still more to do around here, it really was the last that would take a significant amount of time.  It took many, many weekends.  Finishing it up really signified the end of this reno for us and we’ve done our fair share of relaxing these last few weeks with nothing on our to-do list.

Now, we are thrilled to move on and put the finishing touches on the other areas of the house.  We’ll be finishing up and revealing these four spaces THIS SUMMER.  I know that may seem like a lot in just two short months, but we’re playing catch up, y’all!  These spaces have come together (some way more than others) over time, so while the finishing touches will make a huge difference, none of it will take a ton of time.  Get excited!  Here’s what’s coming: First up, we will FINALLY be finishing the master bathroom.  I shared so much of the main progress back in the spring and then this project really got halted for several reasons.  We’ve been waiting on some of the major pieces, but I just couldn’t for the life of me decide on colors for the mirrors and lights and the finishing touches in here.  I probably had too much on my mind with other projects and I wanted to wait until I was absolutely sure.  I think I’ve got it and I’ll be painting a few things in here and revealing this baby NEXT WEEK.  So excited about that!  It’s been a long time coming. After the bathroom is revealed, I will officially be finishing and revealing the living room.  I think you guys have seen more of the progress of this room than any in the house, just because it’s really been a process.  A lot of the rooms I haven’t shared much of, I haven’t done anything with!  Since we spend so much time in here, I’ve really been building it along.  While there isn’t a ton left to do, there are a few big things and tons of details that will really make this the complete space I have in my head.  I’ll be revealing this space later in July! We got this room functional the week we moved in.  Appliances work, the structure was there, but all the details were missing.  While this room really doesn’t require much to be finished up, it got put on the back burner.  Once it was functional, we had to move on and make other rooms functional.  What has to be done in here are craftsman Chris projects and he’s been so swamped finishing the renovation on first the bathroom, then the screened porch.  But finally, this space is going to get some love in the next month or so!  I’ll be sharing progress along, but that reveal is coming, friends! Oh yeah, about that….I have shared nothing about our exterior!  I shared this last progress post linked above and then radio silence on our exterior front.  I got so busy finishing inside rooms and just unpacking and making life functional for us in here that I completely neglected the outside.  It isn’t completely finished, though it does look a far cry from what you see in this post and I will share it all coming very soon!  I’ll fill in all the gaps I may have left out and share progress, why we did certain things, etc.  Oh and we’ll re-visit those crazy befores.

Thank y’all so much for following along on our crazy renovation journey!  It has been one wild ride.  We were just saying last night how much we’ve learned from this project.  We’ve learned so much about construction, what we would do or wouldn’t do again, ways to do things better, etc., but we’ve also learned so much about ourselves and our priorities.  I expected when we moved in back in September to start revealing rooms the next month and just keep that design train moving.  I wasn’t even taking into account all of the renovation junk that was still left to do before we could even think about design details.  And of course there was that unexpected health diagnosis back in the fall that really took me off my feet for awhile.

I’ve worried and stressed about not getting things done sooner for readers’ sake, but really just for myself.  I crave a finished house.  With the way my mind works, I look around and just see what’s unfinished rather than appreciating the insane progress that’s been made.  I’ve learned to not stare at the kitchen and think “Man, I want my hood and tile and shelves!” and instead to think, “Hey, kitchen, you were a dirt backyard six months ago!”  This journey has really taught me to slow down, catch up my breath and do what works for our family.  It’s taught me to revel in the progress and the adventure and to find joy and contentment in the process, not just the finished product.  Most of all, it’s reoriented my priorities.  While I would’ve always said that family and taking care of yourself comes first, my actions rarely supported that.  Now, they feel righted and ready to take on life.  Looking back, this renovation has been so much harder than I expected with many unforeseeable factors, but I wouldn’t change a moment.  This experience has really shaped who we are as a family, what’s important to us, and where we’ll head in the future.

Stay tuned, friends.  It’s going to be a wild rest of the summer around here! 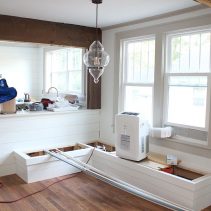 Our Painted Kitchen and Dining Room