I have always loved the look of tie-dye, but frankly, was a bit terrified to try and create it myself.

When I thought of “homemade” tie-dye, I pictured the 70’s tie-dye style t-shirts that I made at summer camp.  They had 59 colors and frankly, made you dizzy.

But then I would go into stores and see the lovely blue and white tie-dye patterns and think, “Oh I love that more than anything in the world!  But if I made it at home, it would never look like that.”

Well, y’all, it surely can.

I was determined for Round 1 of CWTS to create my own tie-dye curtains in blue and white.  I did my research and came across the Shibori technique.  It’s an ancient Japanese dying technique that creates all types of patterns, not just the crazy circles I grew up with.

After doing my research, I made my office curtains.  Here’s an up-close of how they turned out. I have since tie-dyed a table runner and some pillow covers and I’ve gotten the method down!  And the best part?  You can totally customize it for a number of different looks!

And it is so easy.  Like fail proof.  You cannot mess this pattern up.  Imperfections just give it character and actually look purposeful with such an organic product.

I saw some pretty complicated tutorials out there with like ten materials and twenty steps.  This one is simple and I love the product just as much!

Here’s how to make your own! I love indigo dye that gives you that vibrant blue, but my local craft store doesn’t carry it.  From what I can see, you have to order it offline, which is no problem if planning ahead.

Like the nature of tie-dye, I’m more of a free-flowing up and decide to do something person.  I just grabbed some Rit Dye in a color I liked.  Though I love the look of the indigo so much, I’ll probably be making some of that in the future.

This tutorial is called fold and clamp, but it is basically a flag folding technique.

Step 1: Lay your fabric out on a flat surface. You want to accordion fold the entire piece of fabric into  one strip, using an over, under method.

Like in the picture above, fold the end over. Then fold it under.

Continue this folding over and under until you have a long strip of folded fabric.  Make sure that your strip is even.  You want the final fold to reach all the way to the edge.  Take your time getting the fold right because that’s what will determine your pattern. All of you may know how to flag fold, but I did not remember.

You want to fold down one corner forming a triangle.

Then fold that triangle down, forming another.

Continue to do this until the entire strip is folded into one triangle. This is the base of the fold and clamp method.

The “clamp” portion of the name comes from the idea to use wood and rubber-bands to literally clamp and hold the triangle together while it dyes.

For our curtains, we improvised at this point.

We put a rubber-band around the three corners of the triangle.  If you look closely at the print of those curtains, you can see that the circles come from where a rubber-band was and the diamond shapes come from the flag fold.

I really love the circles added in.

For our table runner, we left off the rubber-bands and ended up with just the diamonds.

I did the same for our new tie-dye pillow. You can also vary how large you fold your material.  As you can see above, the print in my curtains is of much larger scale than my new pillow.  The bigger the flag-folded triangle, the bigger the pattern. The goal of this is to hold each side of the triangle into the dye for the same amount of time.  The longer it’s in the dye, the darker it gets.  I just barely put the side of each triangle into the dye.  I wanted a good bit of white to still show, but also, the dye travels up the fabric.

On the curtains, which was a much larger fold, I put about two inches on each side into the dye so that there was a white triangle left on both sides.

Follow the instructions on the dye box for water and dye ratio and use hot water as it suggests.

I would suggest wearing gloves.  Yes, the instructions say that, but I was in too big of a rush and couldn’t find gloves.  The story of my life…I had a blue hand for a day or two.  Oh well, such is the life of a DIYer. Once you’ve dyed all three sides for the same amount of time, rinse it with a hose until the water runs clear.

Then, lay it out to dry and you have a lovely tie-dye project to display only a few short hours later! This is seriously my favorite project ever.  It adds so much personality and funky charm to my office.

I want to tie-dye everything in site!

The photos of this tutorial were from my recent pillow project.  The curtain in-process photos were destroyed by my evil SD card.

Curtains: For the curtain project, I dyed white IKEA curtains that I’d had forever.  I used Rit Dye in Denim.

For the denim and turquoise, you really had to leave it in quite a while (6-8 minutes on each side) to get color.  The navy was so dark and I barely left each side for 1 minute.

Now, go tie-dye friends!  My mom and I have already planned a tie-dye extravaganza when our whole family is together for July 4th.  They’re planning on making tablecloths and runners…I might be venturing into clothes!  And a few more tie-dye home projects will no doubt be on the list. You know I’ll share after the fact. 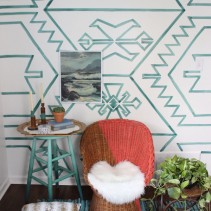 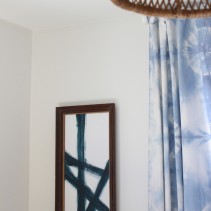 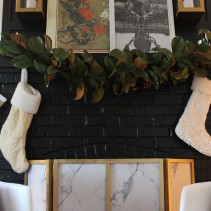 Tips for Surviving the First Trimester