Well, today, I’m going to finally give the story behind the barn door and also show you a new layout of the room.

On our first anniversary this past May, Chris told me he had a surprise for me.  He drove me to a local antiques shop, Shinola, and pointed out this door. It’s from a barn in 1900.  Lots of history and you can see that so well through the paint job. I LOVE the paint and the old hinges. You just can’t fake a look like that.  I loved it immediately and wanted to bring it home!  He knows me so well…I really can’t think of a better gift!

I had no clue what we would do with it – it’s huge…4×8 feet!  It’s been sitting in this corner of our living room for several months. But, I really didn’t like it there.  With it being so tall and being over in the corner, your eye is drawn to it instead of the rest of the room (and it probably doesn’t help that the rest of our walls have been bare!).

Not so pretty.  Originally, I wanted to put it on a track and actually use it, but it is just too big to do that anywhere in our current house.  So, our option is to just display it, which I’m fine with!  It’s too awesome not to have out and about.

So, I decided it would be better to have it more in the center-ish of the wall instead of one corner. I like it so much better there.  Future plans for this room include some floor to ceiling white built-ins and a white board and batten treatment over the fireplace.  When both of those are finished (someday in the future), there will be floor to ceiling white “things” all the way around the room.  It feels symmetrical to me, which I really like.

I really like how it looks behind the chair and side table.

This opened up the other side of the media cabinet for some more seating. But of course, we still have some pretty open and empty walls. I’ve got some plans for these walls, though.

More on that tomorrow! 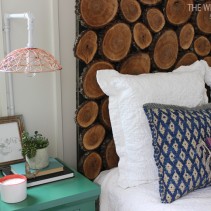 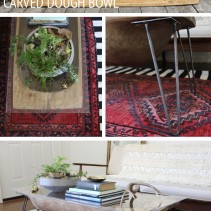